Well it's certainly no Captain Crunch or Fruity Pebbles but we are moving in that direction! On Monday night we gave Brody his first taste of rice cereal. The reviews from his facial expressions were mixed, at one point he tried to grab the spoon and shove it in his mouth and then 10 seconds later you'd have thought we were feeding him the worst thing ever, he just couldn't decide.

My mom was here and she said that we should really try everything that we feed Brody...umm my own breast milk mixed with rice cereal...not so much. BUT last night I decided to give myself a little taste test, so I dipped my finger in the bowl and tried it, well honestly it was WORSE than I had thought it would be...so much that it left this odd taste in my mouth.

We are really looking forward to giving him some "real" food! 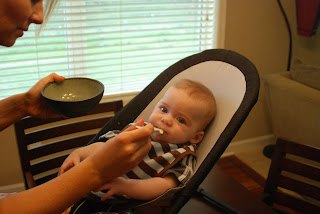 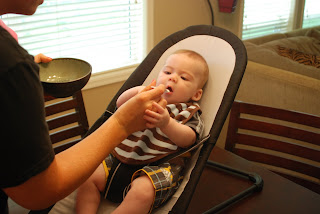 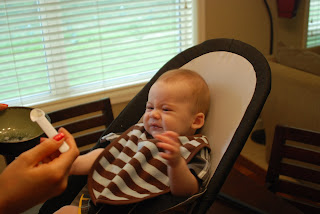