How Tolerant Will Dolly Be?? 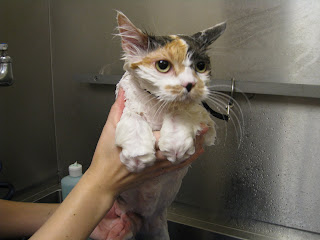 This video makes me laugh, i some how don't think Dolly is going to be nearly as tolerant of "BABY" as this cat is!

I guess she is a tolerant little cat for some things, well she really doesn't have a choice here...we take her to the groomers every 5 weeks for a bath and hair cut (she gets "pampered" more often than I do!). Each time they wash her she cries as if she's being tortured. I snapped this photo of her looking like a drowned rat...doesn't she look thrilled!

I laugh at all my cat postings...while baby Ward is still in the oven, Dolly is our #1 baby!
Posted by Geri at Tuesday, December 30, 2008 No comments:

A Different Kind of Christmas

This year we decided not to travel for Christmas, with me being 33 weeks along i just didn't want to worry about something happening while we drove 10 hours across Iowa/Nebraska or were tried to fly to Maryland and deal with the weather delays, ect so we opted for our first Christmas in MN.

We made the most of Christmas in Plymouth. On Christmas Eve our friends Mike, Tara, Jen and Scott came over for dinner. We had what is considered to be a tradition in my family...soup and sandwiches with tons of appetizers. We all ate way too much, so we followed up with several games of Wii...nothing says Christmas like a competitive game of bowling! On Christmas Day we headed over to Stacy and Jen's house for a delicious dinner of ham, mashed potatoes, green bean casserole and all the other stuff that goes with it!! Ohhhh was i in heaven...i ate enough for myself and tripletes that day!! After dinner the group played Rock Band...I was a spectator as i just have NO musical rythem. Now Jason on the other hand, on the guitar had so much fun that he went to do the splits with his guitar and ripped the entire crotch out of his jeans!

Clearly next Christmas will be different for us as we add one more to our family. It brings a smile to my face to think how next year will be so different as we see Christmas for the first time through the eyes of our very own child!

The practice i go to has some 12 OB/GYN's and since you have no choice of who delivers your baby they recommend if you've had a low risk pregnancy to see everyone. Which i pretty much had done, at week 30 I met Dr BJ Harris and i just loved her...she seemed to care more about me, she asked a lot of questions and actually had a personality outside of just baby talk, she was really a "breath of fresh air" vs the other docs who just didn't give me that same "caring vibe" that i get from Dr. Harris. So i decided that now through the end of my pregnancy and post pregnancy she's my new OB/GYN. Anyway, the 32 week appt went great...and everything seems to be progressing nicely. Weight is up...eekks...but on target...stomach measured right at 32 cm and the heart beat was just right! So appears that Baby Ward is doing well all cozy inside!!
Posted by Geri at Saturday, December 20, 2008 No comments:

OK i know i've been a slack at updating the blog recently and many of you have been requesting updates!! Let me explain further just why you haven't seen any updates...i've been reading, reading, reading...pretty much every book i can get my hands on with regards to prenatal and post natal. It's such an overwhelming topic that i thought perhaps the more educated I made myself the better i would feel about the whole life changing process. As if the classes we took at the hospital just weren't enough (CPR, Breast Feeding, Birthing and All About Baby's)...i have managed to read the following books...
1. "Heading Home With Your Newborn"
2. "Planning for birth and beyond"
3. Of course the old stand by "What to Expect when Expecting"
4. "Girlfriends Guide to Pregnancy"
5. "Baby Bargains"
and today i started on "Happiest Baby on the Block"...ohh wait there are more just waiting for me..."Baby Wise" and "Healthy Sleep Habits" are in line next. I'm sure many of my mom friends are reading this thinking i'm crazy but it makes me feel better...i'm sure i'll still be clueless but at least i've tried! A lot of great information out there...and of course a lot to sift through and decide what will work for us.
Posted by Geri at Saturday, December 20, 2008 No comments: