Brody is just like his daddy, he LOVES to eat! So far we've had success with peas, green beans, squash, applesauce and pears. He was NOT a fan of bananas, the pediatrician said typically they don't like the slimy texture of them, but we'll keep trying. The pediatrician also recommended that we start to give him water in a toddler cup during meal time, he's not sure what to think about that just yet, I think it's more about understanding the new spout and how to drink from it! We've had some issues with consitpation today, so tomorrow we'll remove the rice cereal from his diet because that and applesauce is said to be hard on their GI track. Tomorrow's menu consists of prunes (Mmmm) and oatmeal for breakfast and carrots with oatmeal, since we can't do rice for now!
We've been able to capture some pretty funny facial expressions with all the new flavors! 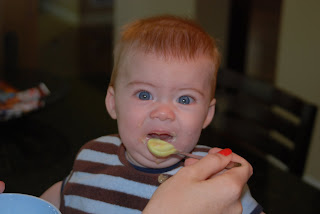 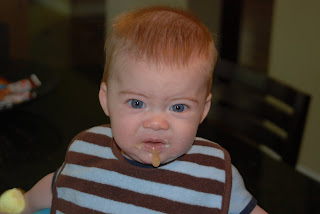 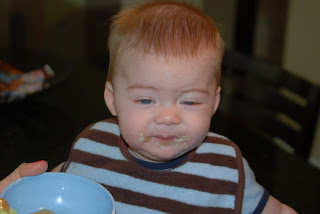