Jason's friend's Dan and Pete were in town last weekend from Chicago for March Madness so they were able to meet Brody! We met them downtown at the Lyon's Pub (so fitting as Dan's last name is Lyon's and he's a boozer...so it worked out well!! hehe). It was fun to see them and introduce them to Brody.
Of course i have to share this story...Poor Pete...he was holding Brody and like most men Brody likes to pass gas and typically with him gas=poo. So without being too detailed...Pete got a poo shower on his shirt and you can imagine what kind of surprise Brody had in his pants...Pete was very calm about it given he has little Gabrielle at home and one on the way it wasn't a big deal...now if Dan would have been holding him that might have been a different story!!! Thank goodness Dan's wife Emilee had sent along a baby gift which included 3 onsies as we didn't have a change of clothes in the diaper bag for Brody! Thanks EM!!!!!
Dan and Brody 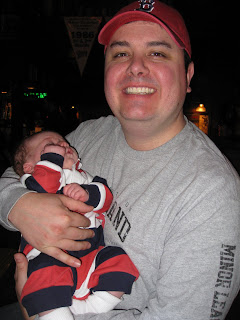 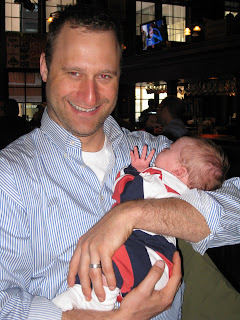 Brody and I in his new outfit! 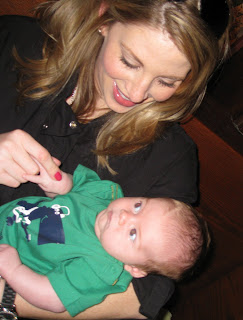