SOO BIG! I just can't believe that our little guy will be 8 months old on Tuesday! He's changing so much and has an incredible little personality. Happy most often unless of course he's hungry and then that's another story, Daddy's genes...right Aunt Jesse! So he's tried all the fruits, veggies and meat purees that are out there...ohh there is veal but I just can't bring myself to feed him that, gross! He also has graham crackers, yogurt freeze dried bites, puffs (of all different flavors) for snack time. It won't be long and he'll be eating more and more big people food.

He's also been talking a lot more, he went from screaming to babbling. Something like, "ba da va da"...it's actually quiet funny as they start to put sounds together. The other night I was changing him and he was babbling away and of course I'm saying "mama" and Jason is downstairs and hears this, so he hops on the monitor (two way) and starts saying "dada", it was actually quiet funny...I do think he'll say dada first and i'm ok with that as i still know he'll always be a mamas boy!!

Mr Brody is on the move, not crawling just yet but he's rolls to get from one place to another and recently he started doing the military crawl especially if it takes him to a toy he wants!!

Daycare is going well, he's the oldest little boy in the room now. This AM when i dropped him 4 of the littler babies were crying very loud and you could see the look on his face like, "you're really going to leave me in this chaos" (ohh those teachers have the patience of a saint)! Anyway, in the next month or so he'll be moved to Infant B and he'll then be the youngest in the class but that is ok. When we were in Aruba Brody loved watching Landon move all over so he'll be able to watch the older babies crawl and start to walk...motivation for sure!

A note from Brody's teacher and a pre-Halloween picture! 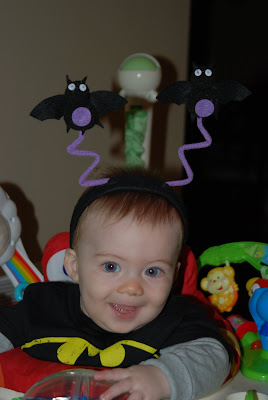 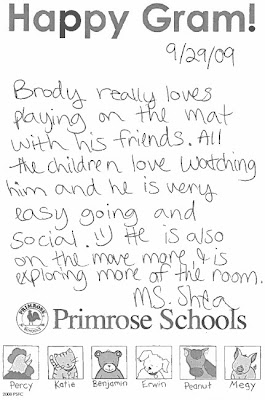