Well the day has finally come for my baby boy to go to daycare. Jason and I discussed who should take him and originally it was going to be Jason as I knew I couldn't make through dropping him off at daycare without a few tears. However today I ended up working from home so that I could go to the dermatologist this am, so I decided I'd drop him off for his first day. The minute I pulled up I started to cry, I knew it would be tough and it was. The teachers were nice and all but it's just not me caring for him! So I dropped him off and cried the whole way home. Then I decided at noon that I'd call and check in on him...appears that he too is having a tough day at daycare. Typically he sleeps all morning and eats about every 3 hours, not today, he's been eating every 2-2 1/2 hours and had only slept 30 minutes and as the daycare director put it, "he's slightly unhappy but doing great". Umm unhappy but doing great?!?! I'm sure he's slightly unhappy as for the last 3 months I held him none stop and then Nana was here the last two weeks and she too did the same thing. I *think* he might be spoiled! Am leaving shortly to pick him up, can't wait to see the little guy! Hope he had a better afternoon than he did morning. I'll hope and pray that his lack of sleep today doesn't make him crabby and irritable tonight! Here are a couple of pics of his first day of "school". 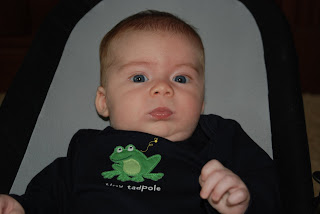 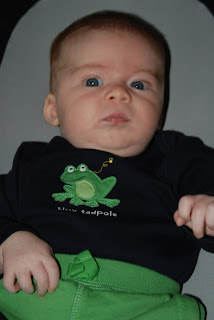