So many of you have asked, which came first Brody's initials BMW or his name...his name of course! However in hind site it works out pretty well because in Brody's life time he'll be far more expensive than a real BMW and because of that we won't be able to afford a real BMW...but that is ok because Brody will bring us far more joy than a fast, expensive car!!

So Broderick was a name I found on line and it was one of the few names that Jason and i actually agreed on. We love how masculine it is and felt it was a name that he be perfect if he decide to be president or an NFL football star! (we are dreaming big for the little guy!!!) The challenge with Broderick is that it was too long to use on a regular basis and i thought that when he went to school and perhaps on spelling test day, he's still be spelling his name while other kids were finishing their tests and we just couldn't have that...therefore Brody became the shortened version we decided to use. Now Jason wasn't a big fan of the shortened version but i think its really grown on him and now he refers to him as Brodacious. The middle name Malcolm is Grandfather John's (Jason's dads) middle name.

So now you decide...which is more worth the money? 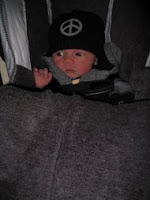