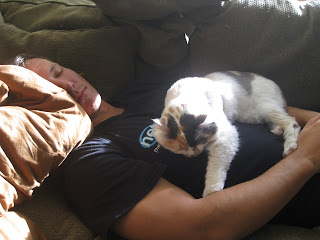 OK, so for those of you who have pets...you can see this story play out...for those of you who don't you think those of us with pets are crazy! Anyway, after lunch Jason was going to lay down and I told Nurse Dolly that while I was working that she was in charge of looking after Jason and making sure if he needed anything to help him out. She meowed as she lay on the couch in her normal spot sunbathing, as in "I don't have time right now". About 30 minutes later i came out of the office and Nurse Dolly had taken it upon herself to make sure that Jason was looked after. I thought this photo was too cute of the two of them sleeping. Umm who's going to have a rude awakening come February?!?!
Posted by Geri at Tuesday, October 21, 2008