Perhaps in the future Brody and Dolly will be good friends but right now Dolly finds Brody nothing more than a pain in the neck. Someone to disturb her while she's sleeping, pull her tail while she's eating or just simply crawl after her when she doesn't want to be bothered. She whines non stop when he's pestering her but isn't smart enough to know that if she jumps up on a higher surface he can't get her. What she has learned to do is go on the other side of the gate just where he can't reach her and meow, this drives Brody CRAZY, he screams and tries to reach her! She is however warming up to Brody, she doesn't run away quiet as fast as she used too and from time to time she'll continue going in circles so he crawls after her, a fun game for both!

The other day Jason got a couple of cute pictures of the two of them... 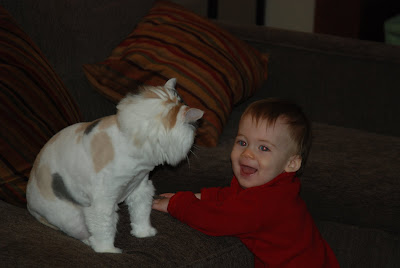 Brody is thrilled that she hasn't run away just yet! 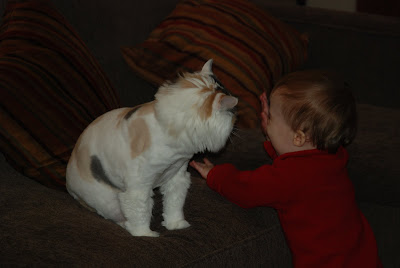